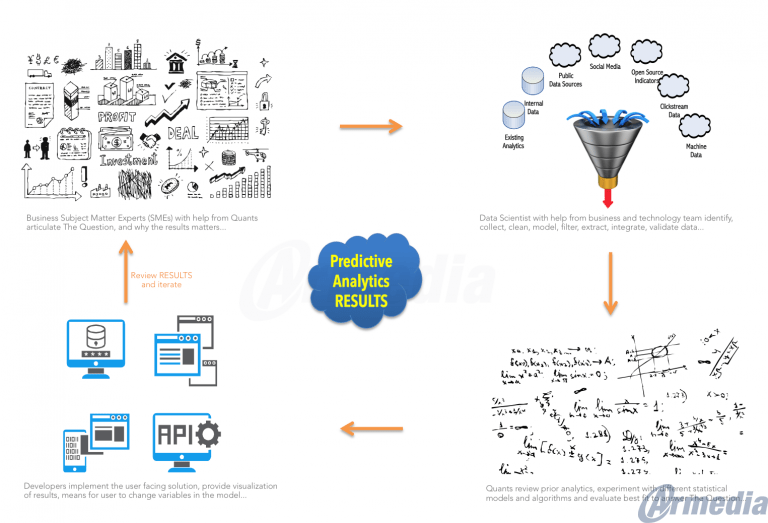 Predictive Analytics and The Most Important Thing

It turns out I was wrong…which happens at an alarmingly increasing rate these days—though I chalk that to a thirst to challenge myself…errr, my story!

So, for a while now, I had convinced myself that I knew what the most important thing was about successfully doing predictive analytics: accuracy of data and the model (separating the noise). Veracity, as they say. In working with a few clients lately though, I no longer think that’s the case. Seems the most important thing is actually the first thing: What is the thing you want to know? The Question.

As technologists, we often tend to over-complicate and possibly over-engineer. And it’s easy to make predictive analytics focus on the how; the myriad of ways to integrate large volumes and exotic varieties of data, the many statistical models to evaluate for fit, the integration of the technology components, the visualization techniques used to best surface results, etc. All of that has its place. But ultimately, first, and most importantly, we need to articulate the business problem and the question we want answers for.

What do we want to achieve from the analytics? How will the results help us make a decision?

Easy as that sounds, in practice it is not particularly easy to articulate the business question. It requires a real understanding of the business, its underlying operations, data and analytics and what would really move the meter. There is a need to marry the subject matter expert (say, the line of business owner) with a quant or a data scientist and facilitate the conversation. This is where we figure out the general shape and size of the result and why it would matter; also, what data (internal and external) feeds into it.

Articulating The Question engages the rest of the machinery. Answers are the outcome we care about. The process and the machinery (see below for how we do it) give us repeatability and ways to experiment with both asking questions and getting answers. 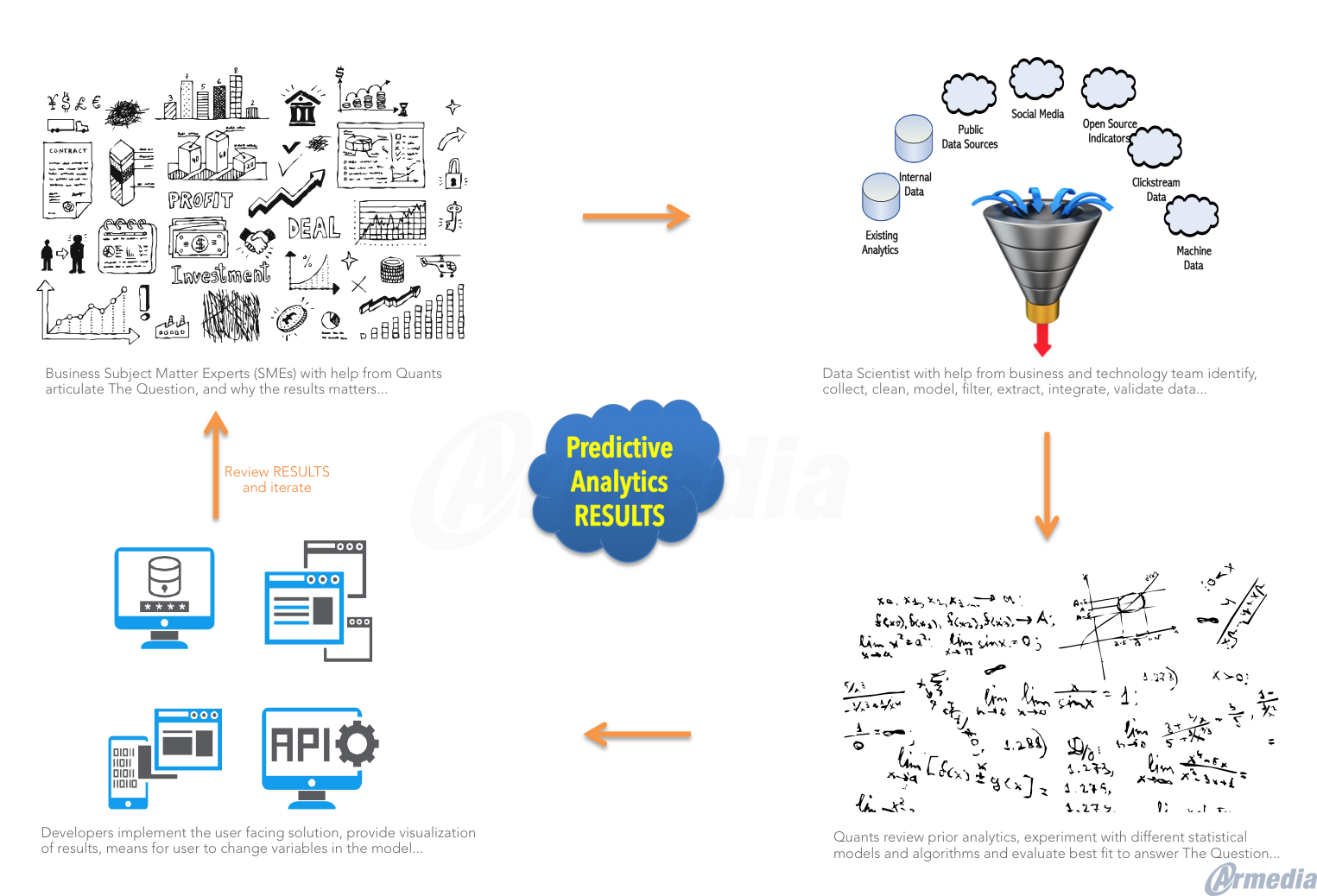 Armedia Predictive Analytics process for getting from The Question to answers

Anything that defines the “future of productivity” deserves a welcoming befitting a king: “the lion roars back”! Luscious superlatives take a number…

END_OF_DOCUMENT_TOKEN_TO_BE_REPLACED

Too expensive. Too bulky. Too consumer oriented. Too many existing competitors. Too niche. Too proprietary. Too slow…

Oh yeah, lots of negativity. Wise words? Truly wise…if your standards are at or below Peter Griffin’s. Otherwise: NO, NOPE, COMPLETELY WRONG. Yeah, the Apple iPhone has proven otherwise. Who knew?! Even Emperor Ballmer was a wee bit off on this one “…no chance that the iPhone is going to get any significant market share. No chance.” Presumably going from 0 to 30% market share in 3 years is not significant…

END_OF_DOCUMENT_TOKEN_TO_BE_REPLACED

So for those of you who may not have heard: The Andy Fastow Story is a far-fetched, weird and wonderful fantasy about a man who single-handedly (well almost…with a little help from a few close golfing buddies: Jeff, Ken, Michael, Rick, Ben and David, amongst others) brings down a giant company, nay, a whole industry, tailspins an entire country into recession, causes the loss of tens of thousands of job and billions of dollars of people’s savings, illegally bags tens of millions of dollars for himself and his best buddy Michael, etc… In this little tale, our hero Andy is magically transformed from an Ordinary Joe to Financial Genius with the help of his friend, and self-anointed god, Jeff. Andy then gets to make up “Andy’s World”, where everything is always wonderful for him and all bad things in the real world are shoved into a box called LJM and then a bigger box called LJM2 (and a couple of broken down pales called Chewco and Raptor). In Andy’s World, Andy and Michael get to make up all the rules. Everybody is invited to play in Andy’s World—at a fee. Everybody will win a participation prize. Everybody will lose a whole helluva lot. Errr, except for Andy and Michael of course—they always win. Until one day, when a nosy stranger starts asking questions like “Andy, how do you do it? …like, can you teach me how to stick really bad things into an ordinary box just like yours and have them just disappear and make me loads of money just like you?” Well, one thing leads to another and this nasty thing called the SEC starts poking and prodding Andy’s World, bugging Andy and asking him the same kinds of stuff; except this SEC thing is scary and has some gnarly militia working for it. The nerve of the SEC questioning whether Andy is on the up and up! Of course, just like all good fantasies, after a bout of the uglies (a little public humiliation and a few years outside the comfort of Andy’s World—chilling in an institution near Colorado), our hero rises at the end and gets to fight another day (presumably with some of those millions he bagged earlier). Unfortunately his friends, well except Michael again, didn’t do so well: poor Ken died, Ben and Rick went to jail, David became known as the world’s most infamous shredder, and Jeff was vilified around the world and got blamed for everything bad in Andy’s World. Oh, and, like millions of people’s lives’ got permanently messed up.

Pretty good story, eh?! I’ve even heard some rumors that it’s loosely based on real life…

Of course the moral of the Andy Fastow Story is that we don’t want another Andy Fastow story. Actually, no more stories at all of that genre. Sadly, it seems to be a trite plot prone to repeat. Who can forget the Bernie Ebbers or the Dennis Kozlowski Story? Or the Lehman and AIG Show? Don’t even start with Maddof! So many copycats, it’s hard to keep track.

The answer to stop these stories, one presumes, is to put in place some controls. Tools that support the controls. And, a scary, ugly and expensive editing process affectionately called the threat of eDiscovery. Oh, and a whole bunch of government type people, lawyers, accountants, bankers and consultants. Now, surely there will never be another Andy Fastow Story. There will never be another Arthur Andersen willing to edit another Andy Fastow Story. In fact, we won’t even need to have any more authors or heroes for these kinds of stories. Our tools will auto-document happy stories where everyone wins and everyone is treated fairly. So, that’s where ECM comes in!

Unfortunately, it seems, again, that reality is just not complying with our carefully thought out plot. Dang! In spite of noise to the contrary, and HUGE vendor propaganda promoting the discovery of gold reincarnated in the all signing, all dancing eDiscovery products tied to ECM solutions, it seems there is a “fiction gap” between is and would-like to be. In fact, records management en-masse (which one would presume to be a precursor to eDiscovery products) is seemingly not much more than email archival these days. All this seems to point to the obvious. What’s the subtext here?

Perhaps the subtext is in the incentives and disincentives. eDiscovery, empirically, seems to be a dance. The goal really is not full discovery or going to court—that would be insanely expensive for most organizations—but a happy settlement, which would be less insanely expensive. Of course to get to the settlement, you still need some level of eDiscovery…to know what is insane and what is less insane! Now, what if eDiscovery were easier? ECM, records management, search and eDiscovery tools all working in unison. A nirvana to be sure. But, would that not potentially lead to greater exposure of being discovered? Would the disincentive of the lengthy, costly and archaic discovery process now be replaced with the incentive of protecting yourself through the same lengthy, costly and archaic discovery process?! Certainly the US government (through the FRCP; Federal Rules of Civil Procedure) doesn’t hope so. In fact, since the December 1, 2006 amendments to the FRCP, effectively dealing with eDiscovery is very much supposed to be on the legal and corporate roadmap of most organizations; moreover they have the burden of responsibility for adequately managing discoverable information at their own cost.

So, where does that leave us? In the spirit of Mr. Fastow and company, I suspect somewhere between pay now or pay later…which is to say, little evidence of much competence at this time. In my opinion, effective and somewhat efficient eDiscovery is directly tied to successful deployment of ECM—properly indexing, managing, storing, retrieving and archiving information, and a streamlined implementation of Records Management—identifying, classifying, retaining and disposing of formal records based on corporate and regulatory compliance policies. I’m sure the eDiscovery vendors would not entirely, or possibly at all, agree with some of these assertions. But then again they may have incentives not to…

Suspense builds. Tension unbearable. As the cards turn…it is, of course, Miss Scarlett (the old fishmonger, Mustard, was never cunning enough to pull this off), with the rope in the (WHAT?!) Library… Those of you with fond childhood, or more recent, memories of Cluedo would have surely related to today’s EMC/Fatwire partnership news. In the worst kept secret category, EMC has effectively chosen to supplant its own Web Content Management (WCM) offerings with Fatwire’s, best in class, offering and in-turn chip in with some DAM going the other way, and, interestingly, only take a minority equity stake at Fatwire.