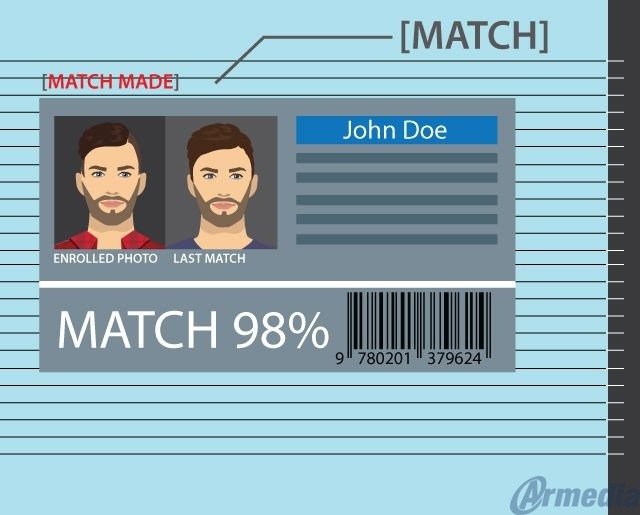 Recently, a client stopped by and asked if Armedia had, or knew of any open source, face matching software that could scan a video and determine if a suspect’s face appeared anywhere in the video.

Our team was intrigued.

In today’s world, how available and how accurate was this type of software? This request launched a line of investigation that not only solved our client’s problem but proved to be insightful and rewarding.

A quick Internet search for open source products that could match a probe face in a video produced limited results, so we expanded our search parameters slightly to include low-cost cloud services.  The products we decided to investigate were:

We assigned a developer to each product to prototype a solution, given only the following minimum requirements from our client:

Early in the project, the pyAnnote developer determined that although the accuracy and output format of the pyAnnote software was impressive, it was intolerably slow (roughly 2-3 times real time).  Therefore, she abandoned pyAnnote as a possible solution and moved on to investigate the Python Face Recognition software, taking a different tack than the developer already investigating the same software.

With these broad requirements, developers were free to architect creative solutions. Therefore, each project took on its own character and individual goals.

The developers and the project managers met weekly for 3 months to demonstrate progress, discuss problems, and to solicit advice from one another.  These meetings were dubbed “face offs” as they took on a tone of friendly competition. The developers went all out to produce the most accurate and fastest performing solution.

Perhaps the most interesting result was that all of these prototypes and underlying technologies achieved nearly the same level of accuracy (see Precision-Recall chart in Figure 1).  Open source, community-driven technology held its own against the technologies developed by the global R&D powerhouse companies.

Although the results were nearly identical, that doesn’t mean they were sound.  Looking at the Precision-Recall chart in Figure 1, you see that the data points cluster around 0.6 precision and 0.45 recall.  This means that 60% of the time the software identified a suspect it was correct, while it only identified 45% of the suspects it was presented.  Ideally, both precision and recall values should be high for an accurate, well-performing solution.

It is important to note that our test videos and real-life videos were low quality, grainy, surveillance videos.  We would expect better results using higher quality videos. 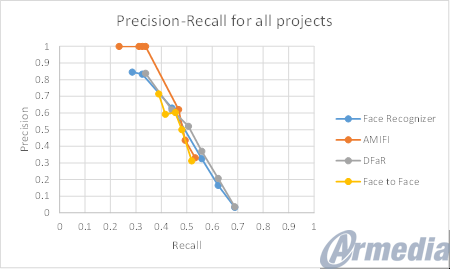 Armedia satisfactorily identified 19 suspects in nearly 6,000 surveillance videos with confidence values and time off-sets so manual confirmation could be made.

The Face Match Face Off is a good example of the type of research and development Armedia brings to client engagements. Our team is well versed and well equipped to research, develop, prototype, and deploy technologies in the areas of computer vision, machine learning, big data, signals processing, and computer forensics.  The Face Match Face Off not only solved a real-world problem for our client, it provided them with information about four leading face recognition technologies, enabling more informed decision making in future technology investments.