Is Your EMR Holding You Hostage?

Let’s take a look at “Nirvana Health System,” a hypothetical 1000 bed system in the City of Nirvana. The system has 7000 employees, 7 hospitals, more than 200 doctors on staff, with another 800 or so who independently perform services in the area.

Historically they and have done what all hospitals do, that is, they have purchased “commercial off the shelf systems” for their Health IT needs (also known as COTS) to run their business, manage patient care, and even market their services on-line. This approach largely met their needs for years, but now after a series of acquisitions, recent and looming changes to their reimbursement model, and myriad technology challenges that result from the shift from “hospital” to “Health System” they are now at a crossroads.  These systems may have performed fairly well independently, but they were never designed or intended to function as one. Meanwhile, the vendors who originally supplied the systems have run out of answers, and Nirvana is suffering the consequences.

Nirvana has successfully standardized on Epic, one of the tier one vendors, as the primary electronic medical records (EMR) vendor at the main hospital, but what they desire is a single view across the entire patient experience. Patients in Nirvana receive services without consideration for Nirvana Health’s desire for a comprehensive patient record. Most will likely receive some health services beyond the reach of EPIC, often simply by receiving care at a nearby doctor’s office which is a different medical records platform.

So why doesn’t Nirvana just demand that EPIC integrate with other EMR systems? No doubt Nirvana and countless others have. But for EPIC to do so would in essence counter act their own commercial interest. To do so effectively makes the patient record portable, and by extension the EMR system as well. Machiavellian principles of self-interest have proven themselves in healthcare information technology (HIT). The only way out for today’s Health Care Systems is to for them to wean themselves from reliance on any one software vendor for any critically required systems.

One way we recommend that Nirvana and others who face similar challenges introduce effective portability and reduce vendor lock-in is through adoption of standards across an array of disciplines, one specific recommendation would likely be for them to adopt a Service Oriented Architecture (SOA).  Still, SOA is largely a foreign concept to them, not to mention the notion of web services (WS) and enterprise services buses (ESB). It is important to note that SOA is not a product, but a philosophy. As described in OASIS SOA Reference Model’s definition, SOA is a model for “organizing and utilizing distributed capabilities”, and especially “capabilities that may be under the control of different ownership domains”. Nirvana will likely never fully control all the patient access points, certainly not soon enough to reach their stated timelines, and the SOA approach places a layer between the applications they rely on and the user experience they desire. 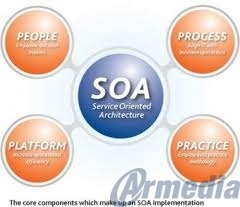 Success with a SOA initiative will require strong support by executive leaders at Nirvana, but will put in place the foundation upon which Nirvana and others like them will be able to address the requirements of today and the unforeseen challenges of tomorrow.  When Nirvana and others like them realize the cure they seek does not come from a pill they can buy, but rather from a new approach that removes their reliance on any vendor, they will prevail.