In this blog I document an issue with SQL Server Management Studio freezing and what I did to resolve the issue.

So while trouble-shooting a SharePoint issue (that’s another blog) I found that the SQL Server Management Studio froze as soon as it loaded and I could only kill it through the Task Manager. I never even got to the screen where you select the server you want to work in.

So what is going on? I checked the SQL Server services and they were all running. I launched the Sql Server Configuration Manager and confirmed that the SQL Server was running from there. Heck, I even went to the console and ran sqlcmd to verify that all my SQL Server instances could be found.

Everything indicates that SQL Server is fine, but I wanted to verify that I could access the data. I created an MS Access database and linked to the SQL Server. Success! I was able to bring down the data into Access.

Hmmm. Having eliminated SQL Server being the issue I decided it HAD to be a problem with SQL Server Management Studio. That being case I figured to repair the product using the original installation media.

Now the original installation media is an .iso file. No problem, using an ISO tool I mounted the image and launched the installation file. Every pre validation check passed, but during the repair I got the following error:

At the end of the “repair” I got the following result. 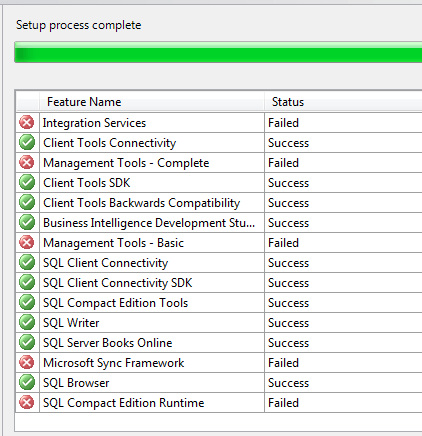 I thought that perhaps I would have a better result if I extracted all the iso file to my hard drive. Unfortunately rerunning the installation had exactly the same result.

If you look at the earlier error message, it states that the installation was looking for a particular file: “SSCERuntime_x86-enu.msi.”

What do I care? I have the 64-bit version of SQL Server installed! I do, however have a file named “SSCERuntime.msi” in the same location that the installation was looking. I found in a google search where someone had the same issue. All he did was rename “SSCERuntime.msi” to “SSCERuntime_x86-enu.msi” and that worked. Good thing I had extracted the image to my hard drive so I could follow his example. (Apologies to the author of that response – I wasn’t able to relocate the URL to give credit).

I reran the installation and THIS time it ran successfully! Now to test…

In the Microsoft SQL Server Forum I found a post by Matt (buddahson) for the same issue. Matt discovered that, when logged in as another user, he was able to open the SQL Server Management Studio. From that he deduced that it might be a registry issue and removed all registry keys for SQL Server for the local user: [HKEY_CURRENT_USER\Software\Microsoft\Microsoft SQL Server] .

And YES! Success at last! The Microsoft Support site (https://support.microsoft.com/kb/970876) acknowledges this is a problem with products listed on this kb page.