What is a Record?

This is the fundamental question that must be answered before answering “What is records management“. Without a clear answer to that question, one cannot determine record titles, develop and apply retention schedules, structure file plans or manage an “item” with software. The answer also makes the difference between establishing an “item” as a record, as opposed to being just a Word document, an email, a piece of paper in a file, or a map of a city. 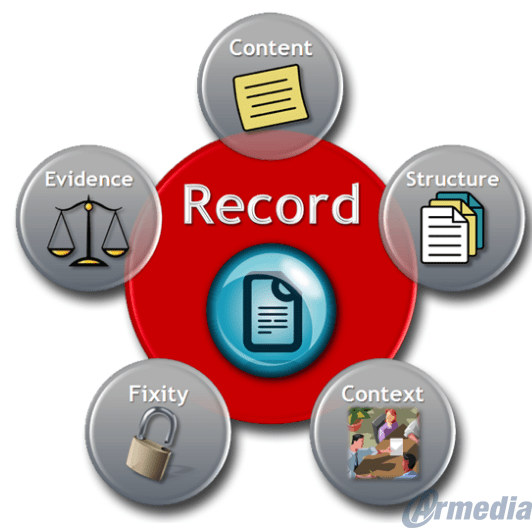 What is a record?

The answer to the question“What is a record” begins with a definition. The primary definition for a “record” is stated in the ISO 15489: 2001 standard. It states the following:

“…information created, received, and maintained as evidence and information by an organization or person, in pursuance of legal obligations or in the transaction of business.”

For the US federal government, the U.S. National Archives and Records Administration (NARA) is required by the Federal Records Act to use a slightly different and more explicit definition:

““records” include[s] all books, papers, maps, photographs, machine readable materials, or other documentary materials, regardless of physical form or characteristics, made or received by an agency of the United States Government under Federal law or in connection with the transaction of public business and preserved or appropriate for preservation by that agency or its legitimate successor as evidence of the organization, functions, policies, decisions, procedures, operations, or other activities of the Government or because of the informational value of data in them.”

Although this definition is slightly different than that in the ISO standard, NARA has incorporated the ISO definition into its regulatory guidance for federal agencies.

The result of these differing terminologies aiming to define a record is the segregation of items into “records” and “non-records” If an item does not meet the definition, it is not considered a record and, therefore, does not require any protection or preservation efforts – it may be disposed of when it usefulness for its owner ends.

If any item does meet the definition, it must also meet certain criteria to be considered a record. The criteria are designed to establish the trustworthiness of the potential record and are inherent to the definition. They are: authenticity, reliability, integrity, and usability. These criteria are defined as:

1. Authenticity: the record is a “true” item – an accurate representation of a transaction or activity, as purported by its creator at the time of creation

2. Reliability: the record can be relied upon to be a trusted source of the information it contains

3. Integrity: the record has not been and cannot be altered. It is complete in form and data

4. Usability: the record can be repeatedly retrieved throughout its lifecycle and used as an authoritative source of the information contained with in it.

If any item meets the specifications which define a record, but fails to satisfy any one or more of the criteria outlined above, the value of the item is suspect and cannot be considered a record. Thereafter, it is considered a non-record and can be disposed of at any time. Conversely, an item that meets all of the criteria of trustworthiness but does not meet the definition of a record, that item, too, is not a record. An example of this is a lunch menu for a nearby restaurant that is found in an employee’s desk. Although the menu may be a trustworthy representation of the restaurant’s bill of fare, if that restaurant is not connected to the employee’s organization, the menu is a non-record. (However, it could be compliant with what defines a record for the restaurant.)

Often, confusion arises in the application of the definition and criteria to an item when determining its records/non-record status. One major causes of this confusion surrounds the item’s media type. Another source of confusion is a failure to appreciate and evaluate the content and context of an item. Media type confusion arises from outdated perceptions of what a record have been. Until recently, many considered paper to be the only items that were records. The perception may have extended even to items preserved on microfilm or microfiche, but not much beyond that. The entire realm of electronic items was ignored.

However, as ISO 15489 and the Federal Records Act make clear, any item, physical or electronic, can become a record if it is evidence of an entity’s business’ conduct and transactions. Therefore, potential items that define a record include:

So long as the item meets the definition and satisfies the trustworthiness criteria, it becomes a record.

The confusion involving content and context is similar to that surrounding media type, as it concerns misinterpretations of how the definition and criteria are applied. One common misunderstanding is the assumption that all emails are records and should be preserved and protected as such. However, email itself is a media type, no different from a note, a letter, or a baseball bat. The factors that elevate an e-mail to record status are the content and the context of the email. At one end of the spectrum, an email between co-workers about where to have lunch, in most instances, would not be a record.

At the other end, an email from a supervisor directing one of his/his employees to undertake certain job-related tasks clearly could be a record (assuming it also trustworthy). However, when context is applied with the content, it can change the status of the item. In the example of the email regarding lunch among co-workers, if business were conducted at the lunch, the email could become a record. If the is used by the organization to prove the time and date of the lunch for the Internal Revenue Service or other governmental entity, the email could become a record. Therefore, it is not the item itself that must be compared to the definition and criteria, but rather the content and context of the item in activity or transaction.

Any sound records management program is founded on the correct definition and trustworthiness criteria of a record. If the definition is absent, or is faulty, an organization’s entire records program can cause incorrect items to be treated as records. Every organization must, therefore, ensure that its record definition and the use of that definition are clear and unambiguous.

For more detail on this subject, please our Whitepapers page and locate the “Records Definition” Whitepaper