Armedia, and Atlanta-based IT firm, is proud to announce that it was named one of the fastest growing private companies by the Atlanta Business Chronicle Pacesetter’s List for 2013. 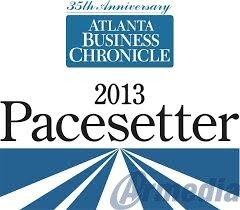 Every year, the Atlanta Business Chronicle recognizes the fastest-growing private companies in Atlanta. This year’s awards ceremony was held on April 26, 2013, at the Cobb Galleria Center.

To qualify for the Pacesetter List, companies were required to have been established in the first quarter of 2010 or earlier, experienced a two-year growth in sales of more than 50 percent, and garnered revenue between $1 million and $300 million in 2012. Pacesetters are then ranked by a growth index formula, which is used to even the playing field among companies of different sizes.